Last August a friend and I took the long flight from Canada to Bali, Indonesia. We took a 14 day tour through G Adventures that went to Bali and Lombok. Both places are amazing and more posts will follow on all we saw. One of the highlights for me was the sunrise hike up Mount Batur in Bali, and I am not a morning person or a big hiker so that is saying something.

Mount Batur is a volcano in the Kintamani district of Bali and is considered a sacred mountain by Hindus. It is a popular sunrise hike with breakfast served at the top to the various hiking groups. Our hike started with a ridiculously early 3:15am pickup at our hotel and (obviously) starts in the dark so we all had to have headlamps or flashlights.

Since it is in the mountain area of Indonesia it is quite cold and everyone was bundled up, but after about 15 minutes we were all taking off layers. This is not an easy hike, although it isn’t particularly long it is fairly steep uphill the whole way, so the time it takes to the top will vary depending on your fitness level. For most people it is approximately 2 hours to the top if you are in reasonable shape. Our guides allowed many rest stops along the way, which was much appreciated as you spend most of the time heading straight up, and even though there is a path and steps created from the rocks for the most part, it is tiring and you need to watch your footing. I recommend taking some time to look at the view along the way, even though it is dark on a clear night there are enough stars, and if you are lucky a bright moon, to provide some pretty incredible views as there is no light pollution other than the headlamps and flashlights of the hikers. It was beautiful and clear when we went up but I didn’t have a tripod with me so wasn’t able to get a photo to capture it.

Most of our group made it up in the allotted time, with one exception who needed additional help from the guides to make it up. At the top you are greeted with hot chocolate, coffee or tea and breakfast. Depending on the company you trekked with, the meal is either a boxed breakfast sandwich, cold boiled eggs and fruit, or some groups boil eggs in the steam pockets scattered around as it is still an active volcano. Dogs also appear out of nowhere (apparently they enjoy the hike too) to partake in any breakfast donated to them by the many hikers. 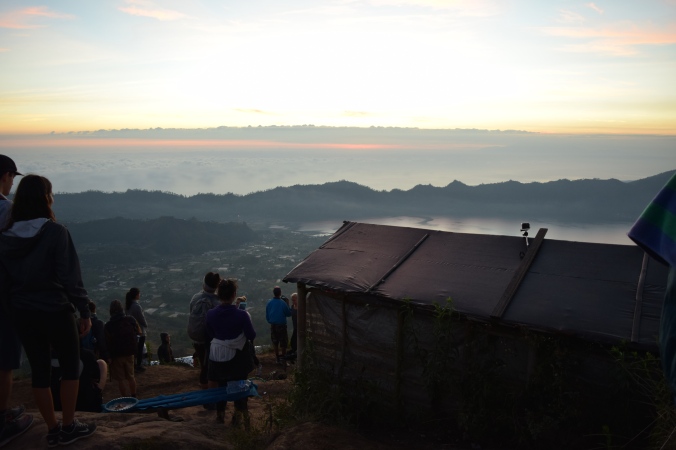 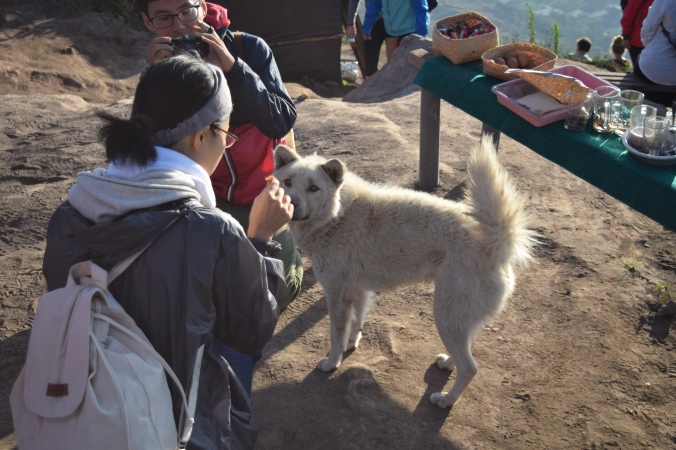 As anyone who has read my previous posts involving hiking knows, it is not my favourite activity unless it is a gentle relaxing walk more than hard core hiking. Yet I will still hike pretty much any volcano or mountain if it is THE thing to do in whatever area I have travelled to. This was one of those times and it was totally worth it. The sunrise was stunning and the views in every direction were beautiful.

I was too busy taking pictures to participate in the discussion of whether to take the easy route down or the hard route which resulted in me just following the group as everyone started to leave. How I wish I could have participated in that discussion! The decision was to take the hard route, and it is exactly like it sounds, much harder, although apparently more beautiful. I can’t compare it to the other option since I haven’t tried it, but this route was definitely challenging. The first part was the worst bit for me as it was a very narrow path we had to walk across to get to the path down. There was a steep and terrifying drop on each side and the path was so narrow you couldn’t comfortably put two feet beside each other. Plus I had a guy in front of me who kept stopping to take selfies (obviously he is not afraid of heights!) so I couldn’t just quickly get to the other side. Instead I had to keep stopping along the way, where there is nothing to hang on to and the wind is howling. The path widened a bit on the other side thankfully but not much. 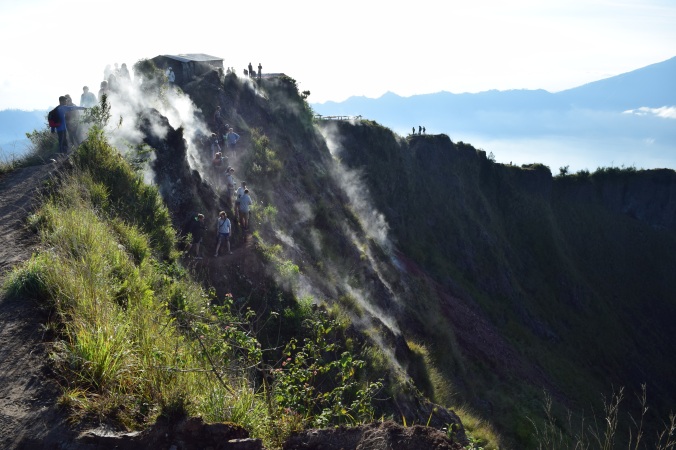 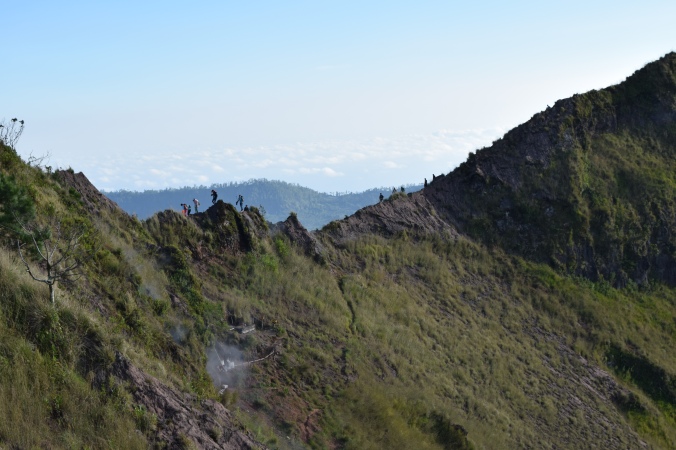 The rest of the way down was steep and covered in tiny volcanic rock pebbles, and many people lost their footing, myself included, sliding on the pebbles. There were beautiful views along the way but I found it harder, certainly scarier, going down than up even though it was daylight as the footing was so unstable. 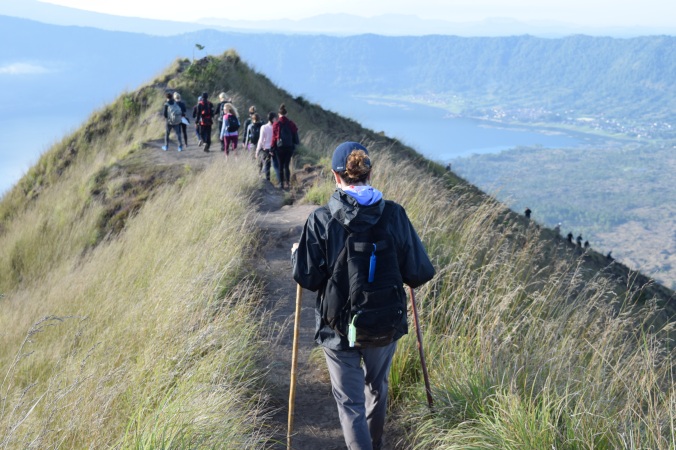 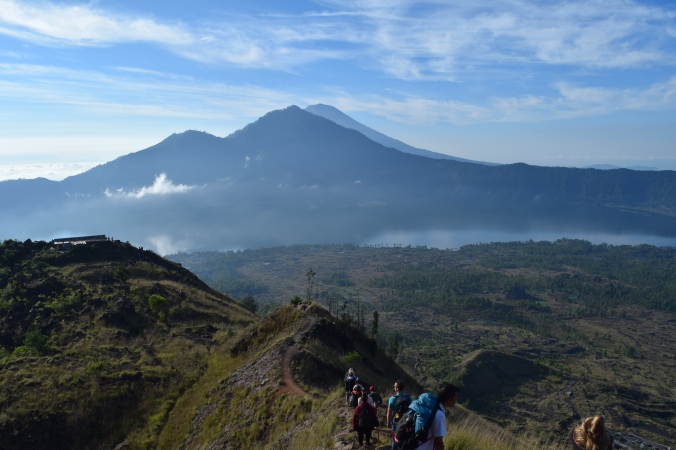 About halfway down, maybe a bit more, we found some monkeys that were very friendly. The guides provided them food and even a few drinks which they happily took. 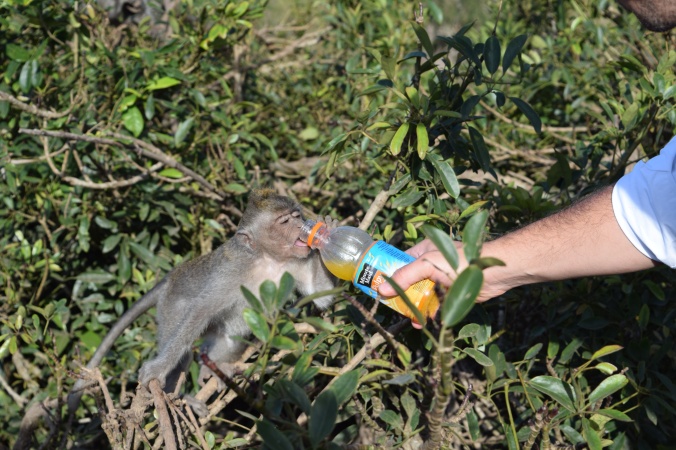 Overall it was a great experience, happy I did it despite the early wakeup and terrifying descent (at least the start of it!) and I highly recommend going on this hike if you are in Bali. The incredible sunrise and gorgeous mountain views are amazing and definitely worth making the trek up and back even if you aren’t much of a hiker. 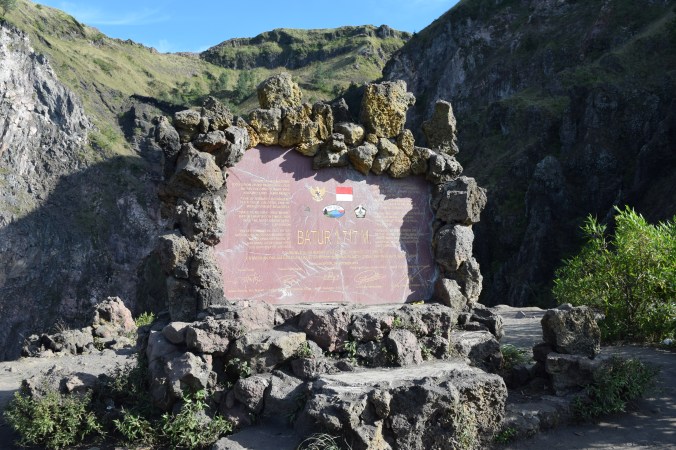