I loved Iceland so much the first time when my friend and I found another amazing deal from Icelandair to go back and see the Northern Lights we jumped at it. Just a quick four day trip which included our flights, hotel and an evening tour of the Northern Lights after a stop at Fontana spa. The downside of going to Iceland when the Northern Lights are visible is you have to go in winter. Fortunately the Gulf Stream moves past Iceland and keeps the temperatures fairly mild, even in winter.

The plan was to spend the first day in Reykjavik visiting museums, in particular the settlement museum, the church and wandering downtown, and then we organized tours around Iceland for the next couple days. Our first day in Reykjavik was lovely, although a bit treacherous with the ice everywhere. We learned that Iceland uses its vast stores of thermal heat to warm the roads and sidewalks by running hot water pipes underneath the downtown area. As a result, they rarely shovel snow and instead rely on the hot water pipes to melt the snow. Normally it works very well, but the day we arrived a cold night froze the melting snow making it quite icy on the majority of the sidewalks. In spite of this, Reykjavik was as beautiful as I remember it and the people just as friendly, although it much snowier this time which in some ways made it even more lovely.  Seeing the city draped in snow with Christmas lights everywhere made it almost magical. Daylight only lasts from 10:30am to about 3:30pm which takes some getting used to! Very strange to be heading for breakfast at 9am and its still pitch black out. But it did add to that magical quality. 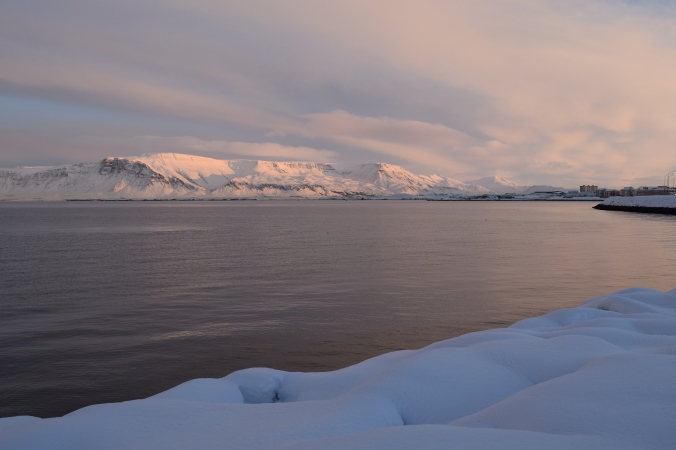 On our second day, we started with a tour with Sterna Travel of Rekjanes (the smoky peninsula), the region around Reykjavik, where we drove through the volcanic lava fields and visited the thermal mud pots. The whole tour was a photographer’s dream; every place we stopped was gorgeous. I toured the lava fields last time but with all of the snow everything looked completely different.

We stopped at Lake Kleifarvatn, one of the deepest lakes in Iceland with black sand beaches.  One of the most beautiful places I have ever been.

The tour continued on to the Seltun hot springs/mud pots to watch the bubbling springs and walk through the area. We stopped for lunch in the pretty town of Grindavik then continued on to the largest hot mud spring in Iceland, it has a crater that is 20 meters round. 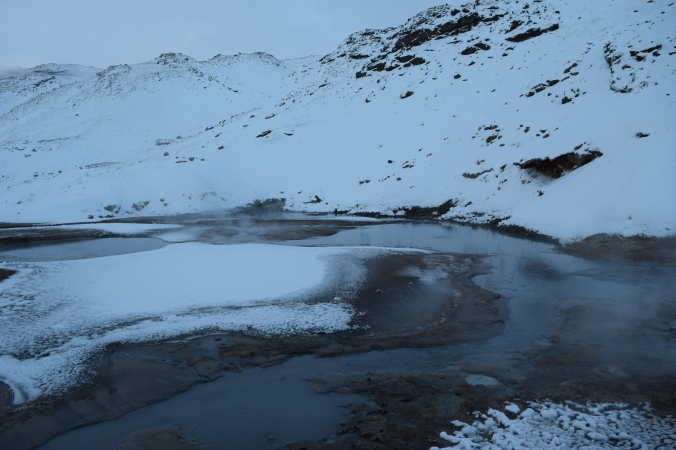 We also stopped for a view of the coast, black volcanic rocks pushing out of the sea as water crashed on the volcanic rock and sand. Our final planned stop was to stand on a bridge that spanned the divide of the American and European continents. 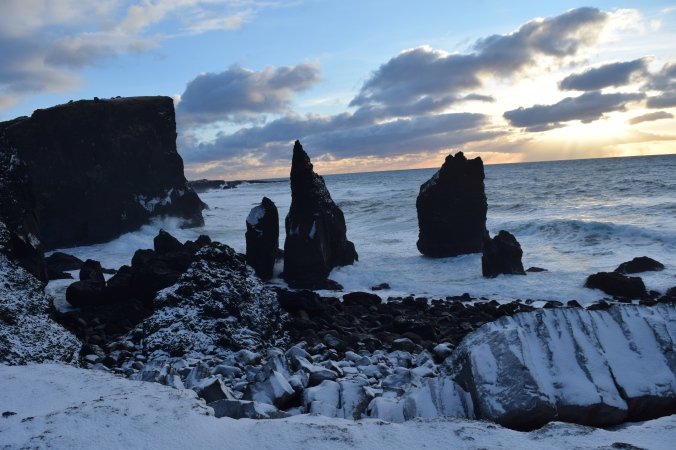 That night was our Northern Lights tour. After a stop at the Fontana spa we started the drive to find the Northern Lights. Lucky for us they were out in full force that night. We only had to drive about 15 minutes when we saw them and we spent the rest of the night taking pictures with our tripods and watching the lights dance in the sky. Below are my favourites of the many many pictures I took.

It was amazing! Good thing I was bundled up as I was out there about 2 hours taking photos. It wasn’t too cold considering it was Iceland at the end of November, but I still needed my warm layers and even then after 2 hours my hands were cold and my camera was starting to freeze, that was the sign it was time to leave. What an amazing night.

At the time we didn’t know how lucky we were but that night a huge storm blew in with 25 cm or more of snow that started in the morning and lasted all day. Needless to say all tours were cancelled including ours to the Golden Circle. Instead we spent another day wandering Reykjavik in the storm, it was really beautiful with the snow falling and it wasn’t too cold, just under zero. We went to the fabulous National Museum of Iceland. What a great place to spend a stormy day. The exhibits were interesting and the museum is huge, to fully look at everything it would take at least an entire day. Icelandic history from the first settlers until modern day life is covered in full detail with a mix of written information, artifacts and audio exhibits where you can listen to stories about what life was like at various phases of Icelandic history.

On our final day we took a transfer to the airport that stopped at the Blue Lagoon so we spent a relaxing few hours having facials and relaxing in the hot springs. Fabulous end to an amazing trip back to Iceland.